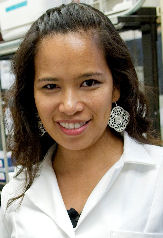 Dr. De Leoz aims to extend the scope of the NIST mass spectral reference library to include glycans and glycopeptides. Her work involves improving the characterization of glycoforms through the development of new mass spectrometry protocols, mass spectral reference data, and data analysis techniques. Dr. De Leoz comes from the University of California at Davis where she earned her Ph.D. in Chemistry. Her Ph.D. research was focused on using mass spectrometry for discovering glycan biomarkers for cancer and understanding the role of human milk oligosaccharides in infants. She has presented a number of talks and posters and her work has resulted in 16 publications and 800+ citations. Dr. De Leoz was named outstanding researcher twice and is a patent inventor on the synthesis of a drug. She has over eight years of industry experience in research and development in an ISO-accredited laboratory.

The National Institute of Standards and Technology (NIST) is an agency of the U.S. Department of Commerce.